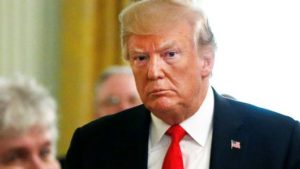 Love the guy or hate the guy, President Trump provides plenty of material for jokes, yarns, stand-up, and all else. This will NOT be political, let me say this again, it is NOT political so if you’re looking for bashing or worshipping, go somewhere else. What we will do is “analyze” the Presidents hair, which for many decades has been the subject of speculation, analyses and jokes.

Before we being to discuss the state of Trump’s hair, lets address the Elephant in the room. His hair is and has been colored for many years, and whoever is his stylist should be thrown in prison. Unless you’re a 10-year-old ginger (that’s redhead in the US) there is no way anyone has a hair color such as this. It must be an out of the bottle orange colored dye job and is in some cases worse then his hair style. You would think that with a stunning model wife, she would at least provide some advice and a bit of help in this matter. My advice, man up and go with the natural grey.

From a professional point of view, what is the situation with Trump’s hair?

Ahem, well there has been much speculation to say the least, and since he has become President the volume has increased 10-fold. These amateur analysts have opined on everything from Hair Transplant, bad Rug (Toupee), Hair Prosthetic, Whig, Comb-Over and a few other bad solutions to hair loss. Some of these are legitimate and others are just outright lies.

Let’s look at a few of these and delve into whether they are applicable in Trump’s case and see if they pass the b***s**t test.

Because of Trump’s celebrity status for all these years, we have been able to follow the progression while having the ability to go back and view images and videos of his hair styles and progress. The color has certainly gone through some iterations and it seems to be getting worse. Unfortunately, the hair color has no bearing or influence on whether it’s a transplant or not.

For those who are familiar with the hair transplant process, which is most likely many as this is a Hair Transplant site, they will recognize after a bit of investigating that this is not a transplant. If it was, there would have been a point in time that Trump would have shown the signs of this, whether it would have been a shaved head or scaring and implants where the grafts were placed. It is not something so easily hidden and for someone in the public eye, its almost impossible.

As someone who always had longish hair, such as Trump, the process is much more difficult and usually not recommended. Those celebrities who have had a transplant usually have somewhat short hair and is less detectable. Also, the hair style which Trump sports is not one that an implant recipient would have. There would be no need for that unruly and unmanageable head of hair. 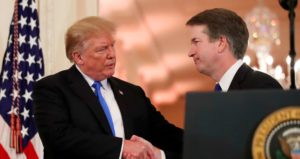 This has been one of the more popular opinions and does hold some merit. If you have seen toupees of the past, they do look similar to a “rug” and in most cases look very unnatural. There is usually a difference in the real hair color and the toupee as well as uneven blend where the hair meets the toupee.

A wig is out of the question because it has no characteristics of this solution. We have seen when Trump’s hair is blown around there are some traces of balding areas as well as uncharacteristically longer hair in strange areas. Also, a wig does not usually have that color as it would blend more uniformly all around the scalp.

The more modern toupee/wig is a Hair Prosthesis. With a little research you will be amazed at what a hair prosthetic can do for an individual’s look. Both men and women undergo this treatment and, in many cases, its undetectable. Many of those who choose this option are actors, celebrities and those in the spotlight. If you’ve ever wondered why so many actors have a full head of hair, then this is it. For specific parts in movies or public appearances, this solution is the way to go.

The technique requires a lot of work and times, although with natural results. From matching the texture and color of your hair, artisans will create a matching “scalp” which consists of a membrane which is placed on the patient’s head with the matching and blended hair. A closer look on the Internet will provide videos and images of patients and celebrities.

A quick look at Trump’s hair/head indicates that he most likely did not undergo this detailed procedure. His hair is too long, and the colors are constantly changing, for the worst. As they say, “there is too much going on” for a prosthetic, which leaves us to the most likely option. 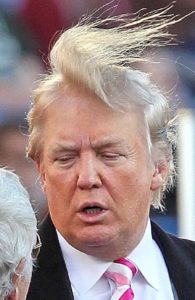 For a man who has been in the spotlight for over 4 decades, has vast amounts of wealth, and is arguably the most powerful and scrutinized person in the world, it is somewhat confusing that he would end up with this. Certainly not the only politician who has opted for the comb-over (i.e. Former NYC Mayor Rudy Giuliani and Israeli PM Benjamin Netanyahu), it’s hard to believe that this is what he has chosen.

A sudden and slightly powerful gust will reveal the long strands of hair and a few bald spots. Most comb-overs are just that, a few long strands combed-over the balding or bald for area in the hopes of some cover. Trump seems to have taken this to a new level and grown whatever hair he still has to extraordinary lengths and created his own natural “wig”. It is difficult to see where it beings and ends and seems to follow no specific pattern. It’s a terrible look for him and is the cause for some funny although tasteless jokes.

Why does Trump keep this hair style and not go for a Transplant? 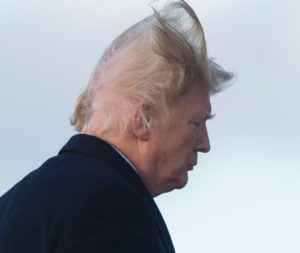 One reason is that Trump is too old for a Hair Transplant. At 72 years old (Born 1946), Trump is past the average cutoff age of 65 for a transplant. Even at the age of 65 there is a chance that the transplant could not be successful. The best time to start receiving a Hair Transplant is in your 20s and 30s, although 40s and 50s are still acceptable. The reason being is that the younger and healthier you are, they better chance of the implants to be accepted into the scalp and a healthier recovery. For Trump, a transplant at this stage would not be recommended. There could also be some medical reasons why Trump never underwent this procedure. From health issues to specific medications, he could have never been a suitable candidate and just improvised as he started to lose his hair.

This leads me to the final conclusion which is that when Trump did start to lose his hair he opted for changing the “part” in his hair from the middle to the side of the head. As he continued balding, the “part” progressively moved to the side, requiring more hair to comb-over as well as improvisation. Chances are that it got to the point where he would have to come completely clean and reveal his hair loss, or he could keep going with the familiar comb-over and somehow make it work.

In the above example of Rudy Giuliani as a politician with a comb-over, Rudy opted to come clean a few years back and ditch that look and go with bald crown, although with hair on the sides. It was not that big of a deal, although Rudy did not have nearly the pompadour that Trump has, which would require some serious courage and confidence on his part. My feeling is that Trump will stick with the tried and true comb-over while deflecting any criticism or speculation about his off color and crazy hairdo. 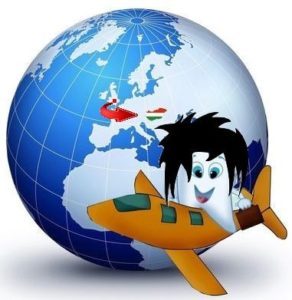 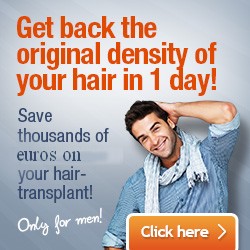